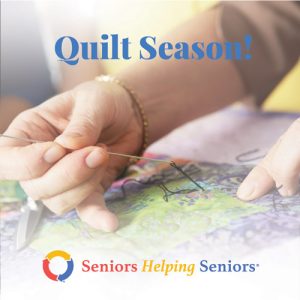 September ushers in shorter days and cooler evenings. After a long, blazing summer, Seniors Helping Seniors® in-home services always welcomes the change of pace! This time of year, a patchwork of leaves starts to color the trees, while we all lean into the cozy days ahead. One staple of chilly weather – the quilt – covers a rich, vibrant history! We invite you to sit back, warm up, and enjoy this latest piece on a threaded artform.

Quilting Origins
One of the oldest quilted pieces - found in Russia and dating back to 100 BC - was used as a carpet. Specifically, the artifact was discovered in a Mongolian cave and can be seen intact to this very day at the Russian Academy of Sciences.

The practice of quilt making can be traced back, in some form, to ancient Egypt. In Europe, quilts were discovered around the 12th century. They were introduced by the Crusaders and were worn under armor for protection. While early quilting was a necessity, they became decorative in the 1300s and gained notoriety in Italy around the same time.

So, what makes these personal warmers so strong, durable and beloved? Well, quilting essentially is the act of stitching two pieces of fabric together with padding in the middle. The word itself – quilt – comes from the Latin term culcita, which means “stuffed sack”. Since their origination, they’ve been built for the long run.

Quilting In The U.S.
The quilt became commonplace in America in the 1700s and was a sign of wealth. In those days, only those with an abundance of money had both the financial means and time to craft such decorative pieces. As the country grew in prominence, so did this popular activity. As a result, the 1800’s saw a rise in three distinct types of quilts:

Then And Now!
America’s Industrial Revolution brought about drastic change as equipment technology and manufactured materials gave rise to quilts produced in the States. No longer were they pieces tethered together by hand with clothing scraps and leftover fabric. Now, they incorporated cotton, woven at a much faster pace – thanks to the invention of the sewing machine!

Quilting continued to evolve over the years, and it was even viewed as a patriotic duty during wartime. Many were donated to troops to bring a piece of home to the fight. As a result, the Red Cross was largely powered by donated quilts through World War II.

Today, quilting is more of a hobby than a necessity. For many families, the craft has been passed on from one generation to the next. At Seniors Helping Seniors® in-home services, we celebrate the role of such time-honored customs in our lives. Whether it be quilting, music, art or another tradition, our senior caregivers share these common interests with everyone they serve!